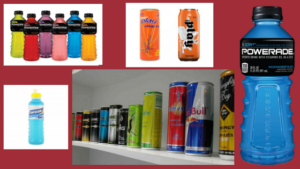 Energy drinks are labeled wrong. They don’t energize you – they stimulate you.

Research shows that beyond a brief caffeine high, there are actually no health benefits to energy drinks. In fact, the combination of different chemicals is likely to do more harm than good, especially for children.

Some of the unwelcome side effects of the drinks include elevated heart rates, hypertension, anxiety, headaches and interrupted sleep patterns.

Listen, I know it’s hard to believe that something that looks like soda could cause any of these symptoms. But let’s look at the facts here: Energy drinks have three to five times the amount of caffeine as regular sodas do. They also include a number of unregulated herbal stimulants and natural blends like taurine, guarana, creatine and B-vitamins.  These are not always listed ingredients on the label.

Does this sound like a product you want your kid guzzling down to get them through the school day? I know we’re all busy, and your child probably has a number of extracurricular activities, tests and projects going on all at once, but energy drinks are not the answer.

The sad thing is that it all boils down to common sense. These products get on the market, and they have flashy colors and cool commercials. The advertisers are specifically targeting kids.

Then, the kids get hurt and everybody wonders: What happened?

Sports drinks, such as Energade and Powerade, usually contain carbohydrates, minerals, electrolytes and flavoring. Their purpose is to replace the water and electrolytes that are lost during sweating. But these drinks contain large amounts of sugar and contribute to childhood obesity just as soda does.

For most children engaging in routine physical activity, plain water is best. Sports drinks contain extra calories that children don’t need, and could contribute to obesity and tooth decay. It’s better for children to drink water during and after exercise, and to have the recommended intake of juice and low-fat milk with meals. Sports drinks are not recommended as beverages to have with meals.

There is no reason at all for children and teens to consume energy drinks.

These drinks, such as Monster Energy and Red Bull, typically contain stimulants including caffeine, guarana, taurine, ginseng, l-carnitine, creatinine and glucuronolactone. Their stated purpose is to enhance athletic performance, endurance and concentration. The dose of caffeine they deliver is both potentially dangerous and unnecessary for children and teens.

This danger of energy drinks is compounded by the fact that adolescents tend not to differentiate between them and sports drinks. They see both has having the same benefits and are unaware of the potential risks from overuse and possible caffeine overdose.

Some kids are drinking energy drinks – containing large amounts of caffeine – when their goal is simply to rehydrate after exercise. This means they are ingesting large amounts of caffeine and other stimulants, which can be dangerous.  Caffeine and kids are not a good combination. Caffeine can increase heart rate, blood pressure, and cause restlessness and sleep disturbances. It can increase Anxiety. There are concerns about the effect of caffeine on the developing nervous system of children as well as concerns about the development of addiction to the stimulant. Caffeine withdrawal can cause troubling symptoms including headache, fatigue, difficulty concentrating, irritability and other problems.

Because energy drinks vary in the concentration and sources of caffeine in them, parents and children may have difficulty knowing how much they are getting. Guarana, a caffeine-containing plant extract, is a common stimulant ingredient in energy drinks. One gram of guarana equals about 40 mg of caffeine. For comparison, cola contains about 35 mg per 8 ounces (or about 55 mg per 12-ounce can); brewed coffee has 145 mg in 8 ounces. Crystal Light Energy drink has 120 mg caffeine in 16 ounces, and Red Bull 80 mg in 8 ounces. Two hundred to 400 mg of caffeine is considered a lethal dose.

What Kids Really Need In Their Beverages

Children and teens with average health, balanced diets, and typical sports participation should primarily rely on water to replace water lost through sweating and urination. They should obtain their carbohydrates as part of a diet balanced in protein, fat and other nutrients. Fruit juice and milk are adequate liquid sources of carbohydrate unless the child is involved in prolonged intensive physical or athletic activity.

The best source of energy for children and teens is a balanced diet, including dietary carbohydrates, rather than drinks high in caffeine or artificial stimulants.

What About the Health Benefits of Sports and Energy Drinks?

The Academy of Pediatrics maintains that while sports drinks may have a specific rehydration/replenishment role for adolescents who engage in particularly vigorous sports, energy drinks are inappropriate and potentially dangerous for children because of the risk of high stimulant ingestion.

The electrolytes (sodium and potassium) in energy and sports drinks are, like caffeine, found in amounts that vary widely. But the fact is that most children can easily obtain the electrolytes they need from their daily diets and don’t need the supplementation of sports drinks to maintain proper balance. Only children routinely engaged in high-exertion, high perspriation sports may need supplemental electrolytes.

Similarly, vitamins, including B and C and calcium and magnesium, that are touted in sports drinks are readily obtained from a balanced diet.

Some sports and energy drinks contain amino acids including glutamine and arginine that are claimed to have performance enhancing benefits. However, their use and safety has not been supported by scientific study and some may actually be harmful.

The good news is that low fat chocolate milk is the recommended post exercise protein-recovery drink. That’s a recovery fluid most children, teens and parents can agree on.

Sports drinks have a specific role for young athletes engaged in prolonged vigorous activity and can be safely used in that context. Sports drinks are not necessary for maintenance of healthy levels of carbohydrates, electrolytes, vitamins or minerals for routinely active, healthy children who eat balanced diets.

Energy drinks are not designed for rehydration/replenishment, and they are potentially dangerous because kids may unwittingly ingest large amounts of caffeine or other stimulants.

Energy drinks can also be abused by children and teens who are looking for a stimulant product to increase alertness and combat fatigue. Excessive consumption may lead to dangerous levels of caffeine with the potential for unwanted side effects and dependence. The American Academy of Pediatrics deems them inappropriate for use by children and teens.

Both energy and sports drinks are contributing to dental disease and the epidemic overweight of children and teens because of the amount of carbohydrate contained and the substitution of these products for water.

Parents are advised to monitor their children and teens’ use of sports and energy drinks, provide water for most situations, and discuss the safe use of sports drinks in their child’s athletic pursuits with their doctors.