Does working out on an empty stomach burn more fat?

For something that should be simple, working out doesn’t always feel that way. There’s choosing the best  workout. There’s that pesky question of whether exercise or diet is key for weight loss. And now there’s a new one to throw into the mix: whether working out on an empty stomach will help you lose weight faster.

Bodybuilders swear by it while some people religiously enjoy their pre-workout protein shake. So what gives? If you want to shed pounds, should you be forgoing food and hitting the gym on an empty stomach?

Unfortunately, like so much fitness advice, this falls into the gray, “it depends” area.

Why Work Out On an Empty Stomach?

The theory behind exercising with an empty stomach is that when you squeeze in a morning cardio session before breakfast, your body burns fat faster.

See, what happens is that glycogen, a type of carbohydrate that our bodies store, “runs out” overnight. When you wake up and hit the gym first thing in the morning, because your body is low on carbs, the idea is that the body will turn to fats next to gain energy.

Things do get tricky because if your body is totally out of glycogen — you had an early dinner, got a full night’s rest and maybe snoozed an extra hour or two — the body might skip fat burning and head straight to muscle stores instead, chipping away at body definition.

Benefits of Working Out On an Empty Stomach 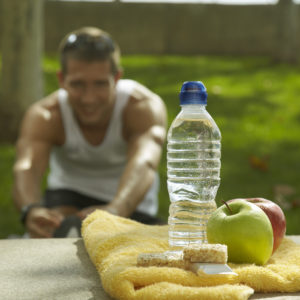 So what does the science say the benefits to skipping breakfast before working out?

1. Burn fat faster. One study followed 12 active males who ran on the treadmill either after breakfast or while they were still fasting from the night before.  The guys who hadn’t broken their fast, i.e. hadn’t had breakfast, burned up to 20 percent more body fat during the same workouts.

What’s especially interesting is that the men who skipped breakfast didn’t overeat later or try to otherwise “make up” for the early AM calories they missed out on. So getting a head start on your workout pre-breakfast could help you lose more fat without causing you to sneak in extra calories later.

2. Improve performance. There’s evidence that exercising when your carbohydrate levels are low, like when you’re on an empty stomach, actually helps improve performance during “normal” workouts. The idea behind “train low, compete high” is that working out in a glycogen-low state helps your body become more efficient at burning fat so at times when carb levels are high, the body is primed and raring to go.

3. You can improve your body’s response to insulin. When we eat, our bodies release insulin to absorb all the nutrients in the foods we’re enjoying. But when we’re eating too many carbohydrates and sugar, our bodies become resistant to insulin — it’s unable to do its job as well.

All that insulin builds up and can bring about a range of chronic illnesses, like diabetes. One of the many health benefits of fasting, however, is reducing that sensitivity to insulin. Without constant food, insulin isn’t created as often, so our bodies don’t become immune to the hormone.

4. You might be inspired to workout more. Let’s face it — we’re all super busy. By working out in the morning before stopping to make breakfast, having that cup of coffee or whatever else it is that might derail you in the mornings, you can get your calorie burning out of the way without the distractions that happen later.

If you need to be out of the house by 8 a.m., it’s a lot easier to hit the gym before eating as opposed to sitting down for breakfast, waiting to digest and then working out.

But working out on an empty stomach might not be the best idea for everyone. For every study that says burning fat happens more easily when you exercise before eating, there’s another one that says the opposite. An International Journal of Sport Nutrition and Exercise Metabolism study found that a pre-workout snack or light meal actually helps burn body fat better.

And a study published in the Journal of the International Society of Sports Nutrition found no difference in weight loss between women who ate a meal-replacement shake before exercising and those who got straight into their workouts without eating.

Another issue is that without any fuel in your belly, you might not be working out as hard as you can. A pre-workout snack that’s a mix of carbs, protein and healthy fats can give you the energy you need to push yourself harder.

That extra fire might be just what you need to complete high-intensity interval workouts like Crossfit or Tabata, which actually help you burn more calories in a shorter amount of time. These are intense workouts where you’re going to want to max out your energy.

And if you’re training for endurance sports like long-distance racing or a triathlon, working out on an empty stomach might work for short distances, but you absolutely want to eat before longer workouts — depending on how far you’re going, you might even need to re-fuel during training.

Finally, if you’re someone who mentally needs to know that you aren’t going to burn out mid-way through exercising because you’ve eaten, it’s not a good day to exercise on an empty stomach. Same goes for people who are diabetic or experience low blood sugar. Eating a small snack will keep you safe during your workout.

I wish I could tell you definitively that working out on an empty stomach will lead to better results. But because so many variables are at play — how fit you already are, what type of exercise you’re doing and how you workout best — it’s impossible.

What is crucial is that you stay hydrated before, during and after your workout. Drinking enough water will keep energy levels up. Because thirst is also mistaken for hunger, drinking enough H2O can also keep pounds at bay.

Maybe more importantly than whether you eat before a workout is what you’re having afterward. A mix of protein and healthy carbs will help your muscles recover. Drinking a post-workout recovery shake or eating eggs with veggies in the first 45 minutes after exercise while your blood is circulating well is ideal.

Finally, whether you’re working out on an empty stomach or not, well done for getting out there and taking control of your health. Keep up the workouts!

FOR MORE HEALTH AND FITNESS CHATS, EXERCISES AND MOTIVATION, GO TO OUR FACEBOOK PAGE: