TO PLANK OR NOT TO PLANK……… 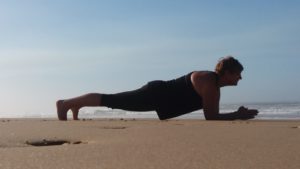 You probably don’t know that Tom Hoel held a plank for four hours and 28 minutes on May 22, 2015, setting a world record.

What you also didn’t know, is that this record was shattered by a 57 year old George Hood, a  trainer and former Marine, in Southern California. He went five hours, 15 minutes.

What a pointless record to pursue, you might think.  Perhaps just 2 minutes of planking is already too much to comprehend.

WHY SHOULD YOU PLANK?

HOW LONG SHOULD I HOLD A PLANK?

The Plank challenges (where you aim to hold the Plank for 3 or even 5 min) are getting very popular. But these challenges train your willpower and your mind more than your core.

When a Plank is performed with the right form it’s challenging even for a short time.

Why do you want to hold a plank for longer than 2 minutes?  To be able to say:”Because I can”, and get recognition for it?  Or are you wanting to improve your health, which should be your ultimate goal.

Holding a plank for 2 minutes takes concentration, mind-power and correct form.  Doing a plank RIGHT is far more important than how long you are holding it.  If when you are able to hold a plank for 2 minutes, you have broken your own record, why not move on to challenging your body in other ways, like variations to planking, challenging your body once again and pushing its limits.

HOW TO DO A CORRECT PLANK:

Place the forearms on the ground with the elbows aligned below the shoulders, and arms parallel to the body at about shoulder-width distance.